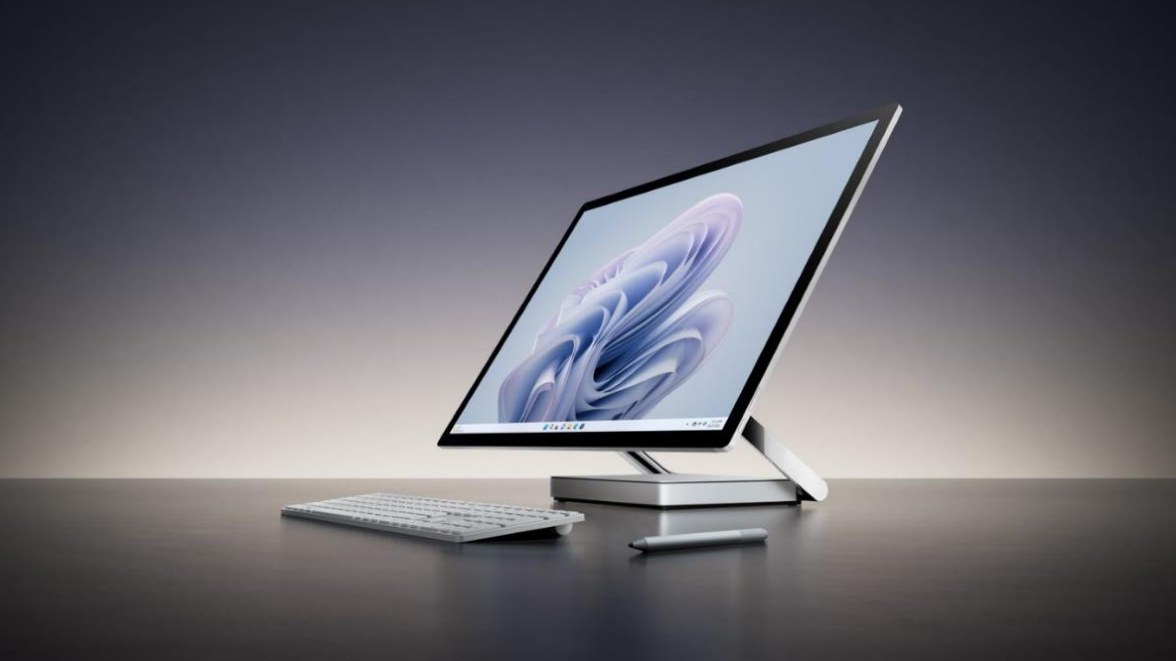 Microsoft doesn’t consider the Surface Studio range to be a priority, which is probably why it waited nearly four years to launch a follow up to the Surface Studio 2 and didn’t see it fit to call it a Studio 3. Instead, the sequel is called the Studio 2+ (opens in new tab).

Designers behind Microsoft’s all-in-one business PC have stuck to the original form factor, with a so-called zero gravity hinge, a stand base that doubles as a base unit and a 28-inch 4500 x 3000 pixel touch display. The latter was and remains the main selling point of the Surface Studio 2+ and works well with the bundled digital pen.

This is a DCI-P3-rated display with a contrast ratio of 1200:1, a Gorilla Glass 3 overlay and ACM (auto color management). The screen alone makes it a serious contender, at least on paper, to appear in our best business monitor, best monitor for video editing, best monitor for photo editing and best monitor for graphics design guides as well.

Compared to its predecessor, the Studio 2+ swaps a seriously under-powered Core i7-7820HQ processor for an 11th generation Core i7-11370H processor and pairs it with an Nvidia Geforce RTX 3060 laptop GPU with 6GB GDDR6 (in lieu of an old GTX 1060).

While we understand the use of the RTX 3060, we fail to grasp why Microsoft deliberately chose not to go for the latest processor ranges; AMD just launched its Ryzen 7000 series while Intel unveiled its 13th generation Core range, both excellent candidates for the Studio 2+.

Pricing is likely to determine competitiveness

Connectivity includes three USB-C connectors with Thunderbolt 4/USB 4.0 compatibility, two USB-A ports, Ethernet and a 3.5mm headphone jack. But there’s no memory card reader, no HDMI/DisplayPort connector and wired connectivity is limited to 1Gbps, which somewhat undermines its positioning as a powerhouse for creatives.

Microsoft also bundles a Surface keyboard and a Surface mouse (as well as a power cord with grip-release) in the box.

. The Surface Studio 2+ will cost a whopping $4,299 in the US, with preorders being taken for an October 25 delivery and £4,699 in the UK with general availability starting from November, 1st. No pricing and availability have been confirmed for Australia.

The Studio 2 was quietly retired earlier this year, with the Surface Laptop Studio being positioned as the natural alternative; this is likely to change.

At the time of writing, none of the big three (Lenovo, HP or Dell) have an all-in-one desktop PC capable of rivaling the Surface Studio 2+ in terms of features, but will have no trouble competing on the performance front. Apple, meanwhile, had the iMac Pro, but stopped selling it shortly after leaving the 24-inch iMac as the only Apple all-in-one computer.

Security professionals are being overworked – and that’s a huge problem

Even the Windows logo isn’t safe from malware