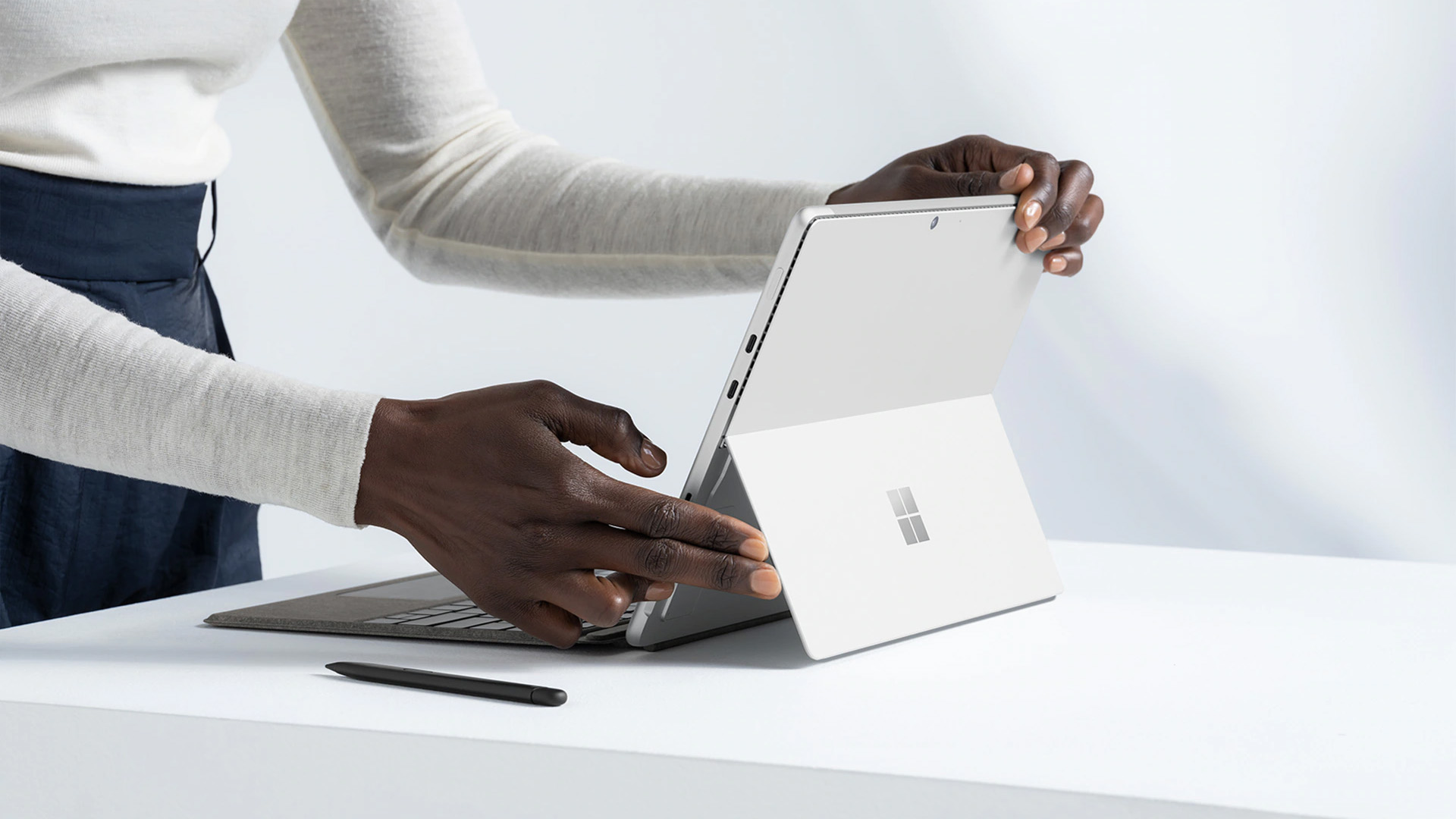 We’re now hours away from Microsoft’s October 12 Surface showcase event, and we’ve been combing through rumors and leaks to work out what hardware is most likely to show up. At this stage, all sources point towards a triumvirate of new Surface products: led by the Microsoft Surface Pro 9 tablet.

Needless to say, the Surface Pro 9 has some fairly big shoes to fill. The Surface Pro line languished for a few years in a state of general uncertainty and less-than-stellar sales, but the excellent Surface Pro 8 solidified it once more as a flexible, dependable choice of tablet-cum-laptop.

Unless it features some seriously revolutionary changes, we’re expecting the Pro 9 to iterate on its predecessor rather than reinvent the wheel. The Pro 8 enjoyed an upgraded camera array, better battery life, and a superior display; ultimately, we’re not expecting too much to change.

Be aware that everything that follows is only conjecture based on currently-circulating leaks and rumors. We’ll update this page after the live event with all the juicy factoids we can cram in, but for now you can read on to hear our hopes and expectations for Microsoft’s newest Surface Pro.

Microsoft has stuck to a rigid annual release schedule for each new Surface Pro model, typically dropping them in the third quarter every year since 2013. The only exception was in 2020, where the pandemic’s impacts on tech supply chains likely caused a hold-up.

Still, in September 2021 we got the Surface Pro 8, and it looks very much like Microsoft is keen to get back to yearly launches with the Pro 9 anticipated to release this year.

There’s no official release date for the Surface Pro 9 yet, though we’d be surprised if it didn’t launch soon after Microsoft reveals it – and we’re very much expecting to see it revealed during the Surface event. That does mean we’re probably looking at a Q4 2022 release – a little later than usual, but understandable given the still-troublesome impacts of the pandemic.

We don’t have any news from the horse’s mouth when it comes to pricing either, but ideally we’d like to see any new Surface Pro tablet match the Pro 8 for price. That would mean we’re looking at a price range starting at $1,099 / £999 and topping out at $2599 / £2,459. Any jump in price at this point will potentially be a deal-breaker for most users, especially because the keyboard and trackpad Type Cover still isn’t included.

While we’re on the topic: why isn’t the Type Cover included as standard? Raise the price a bit and bundle it, Microsoft; many users don’t like the idea of dropping an extra $179 / £159 just to fully realize the Surface Pro’s potential as a 2-in-1 tablet-laptop. After all, that’s what the Surface Pro is meant to be, right?

There’s still a few places where we can potentially see Microsoft improving the Surface Pro’s design, despite the fact that the Surface Pro 8 is already pretty terrific in its own right.

For example, will Microsoft give the new Surface Pro a 4K display or offer it as an option for the highest configurations? Most of the Surface Pro 8’s upgrades are display-focused, narrowing the bezels for a slightly bigger screen size and largely the same footprint, giving it a new resolution to keep the 3:2 aspect ratio, and slapping on a 120Hz refresh rate for good measure. However, if this device were to keep up with the demands of its target users, which are designers and creators, adding a 4K option would be a good idea.

Also, for a device that’s positioned to be a tablet-laptop hybrid, it’s severely lacking in physical ports and as we noted above it doesn’t come with the keyboard and trackpad Type Cover out of the box, just like the previous models.

One of the things we missed from the older Surface Pros is the USB Type-A port, with the Surface Pro 8 opting, and rightly so, for the Thunderbolt 4 instead. But, for the same reasons that Microsoft should include the Type Cover without extra cost, the next model should have more input and output ports on hand. While it’s at it, the company should get rid of the Surface Connect port – something that might actually happen, given the EU’s recent ruling that laptops will need to charge universally via USB-C.

Finally, while the rear camera has just been upgraded, a 12MP one would not only allow it to catch up to the iPad Pro, but also make it even worthier of that “pro” title.

We’re fully expecting the Surface Pro 9 to come equipped with Intel’s 12th-gen processor at this point. Anything else would be foolish, to put it simply; the Alder Lake CPUs provide such excellent performance thanks to their big.LITTLE core architecture, they’re the obvious choice.

That means we should see a pretty significant performance leap from the Surface Pro 8’s Tiger Lake processors, which will hopefully let the Pro 9 take even better advantage of the other components found in the higher-spec models of the Pro 8.

With 12th-gen Intel comes support for DDR5 memory, so it would be great to see that too – hopefully with up to 32GB in the more powerful variants. As for storage, there will likely be a range of versions – though we doubt we’ll see a model with more than 1TB of space.

The Surface Pro 8’s battery life and charging capabilities are among the best we’ve seen on a high-powered laptop, let alone a tablet. We hope that Microsoft keeps that same longevity (or better) on the next-generation Surface Pro, even with more powerful internals.

Google Cloud is cutting the price of some virtual machines